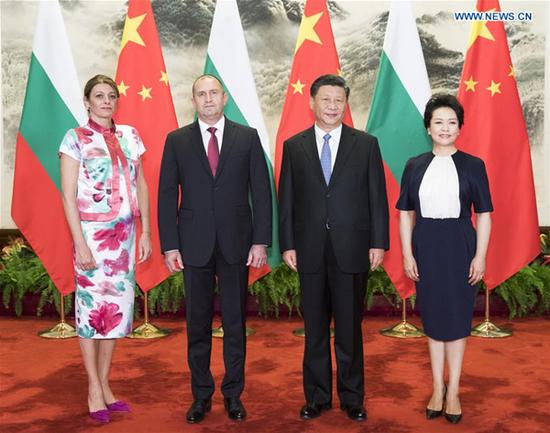 Chinese President Xi Jinping on Wednesday held talks with Bulgarian President Rumen Radev in the Great Hall of the People in Beijing, and they decided to lift state-to-state ties to a strategic partnership.

Bulgaria was one of the first countries to establish diplomatic relations with New China, Xi noted, hoping that the two countries take the strategic partnership as a new starting point, work together to cope with the test of international changes and inject new impetus into bilateral cooperation.

Xi stressed that the two sides should respect and trust each other and strengthen exchanges between the two governments, legislative bodies and political parties while maintaining mutual support on issues involving each other's core interests and major concerns.

Bulgaria is also one of the first Central and Eastern European countries to sign intergovernmental cooperation documents with China on the Belt and Road Initiative. Xi said China is willing to strengthen the synergy between the two countries' development strategies, promote infrastructure connectivity, expand trade and investment and cement people-to-people exchanges.

Xi reiterated China's firm support for the European integration process, EU's unity and growth and Europe's more important role in international affairs, saying that China's upholding such stances is not an expedient measure.

"Bulgaria is a good friend and partner of China in the EU and an important participant and advocate of the cooperation between China and the Central and Eastern European countries. It is hoped that the Bulgarian side will continue to play a constructive role in this regard," said Xi.

Radev said he was very happy to visit China on the occasion of celebrating the 70th anniversary of the establishment of bilateral diplomatic ties.

Lifting the bilateral ties to a strategic partnership will further strengthen the foundation of bilateral relations, said Radev.

Radev said the Bulgarian side is ready to deeply participate in the Belt and Road Initiative by giving full play to its advantages of location in the region and trying to become a gateway and hub connecting Europe and Asia.

The Bulgarian side is willing to expand cooperation with the Chinese side in such areas as trade, transportation, aviation, logistics, finance, innovation, local areas and people-people exchanges, and welcomes Chinese enterprises to increase investment in Bulgaria, said Radev.

While expressing Bulgaria's support for multilateralism and the World Trade Organization, the Bulgarian president said his country stands ready to step up communication and work for advancing Europe-China relations and cooperation between the Central and Eastern European countries and China.