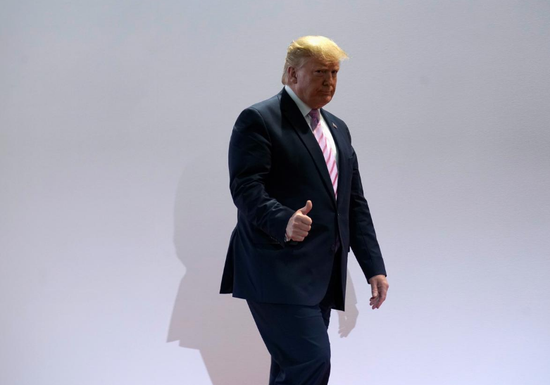 U.S. President Donald Trump tweeted on Saturday that he would like to meet with the Democratic People's Republic of Korea (DPRK) leader Kim Jong Un at the demilitarized zone (DMZ) on the border of the DPRK and the Republic of Korea (ROK).

After attending the G20 summit in Osaka, Trump will head to Seoul to meet ROK President Moon Jae-in.

"While there, if Chairman Kim of North Korea sees this, I would meet him at the Border/DMZ just to shake his hand and say Hello(?)!" Trump said on Twitter.

"If he's there, we'll see each other for two minutes, that's all we can, but that will be fine," Trump said. He added that he and Kim "get along very well."

The surprise offer came amid a recent flurry of diplomacy over DPRK's nuclear program after a Trump-Kim summit in Hanoi collapsed in February without an agreement.

U.S. special envoy Stephen Biegun said on Friday the United States was ready to hold constructive talks with the DPRK to follow through on a denuclearization agreement reached by the two countries last year, the ROK foreign ministry said.

Biegun told his ROK counterpart, Lee Do-hoon, that Washington wanted to make "simultaneous, parallel" progress on the agreement reached at a summit between Trump and Kim in Singapore last year, the ministry said in a statement.

Trump said before departing for the G20 Osaka Summit that he did not expect to meet with Kim during his trip.

U.S. Secretary of State Mike Pompeo said this week that a recent exchange of letters between Trump and Kim boosted hopes for a restart of talks, calling it a "very real possibility."