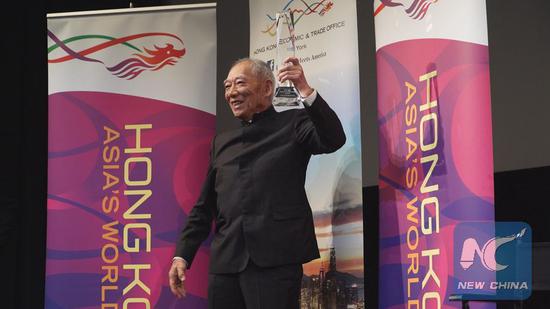 Yuen Woo-ping, a renowned martial arts choreographer and film director from Hong Kong, China, was honored here Monday night for his extraordinary contribution to the special film genre in the past decades.

Upon receiving the award, Yuen said that throughout his career he had discovered a number of talent, such as Jackie Chan, Donnie Yen, and Wu Jing, and witnessed their way to stardom.

"I hope that new faces will always emerge in the Kung Fu film genre, passing on the Kung Fu culture to future generations," said the master.

During a press conference held Monday afternoon at a theatre of Lincoln Center, Yuen said it was his father who influenced him the most during his 50-plus years of career.

Under his father's guidance, Yuen developed a real passion for Kung Fu, which keeps him devoted to his job.

"Passion is the key to success," said Yuen. "You can never carry on with something for decades if you are not interested in it."

From Hong Kong to Hollywood, Yuen has won numerous awards for his works, such as Iron Monkey, The Matrix, Kill Bill, and Crouching Tiger, Hidden Dragon, many of which are remembered as classics in the history of Kung Fu or action movie.

Though technology in filmmaking has made tremendous progress, Yuen said he will keep making "authentic" Kong Fu films in which actors and actresses stage real fights instead of using computer-generated imagery.

Yuen also brought to the film festival his new directing work, Master Z: The Ip Man Legacy, as one of 10 films of The Hong Kong Panorama, a traditional program of the NYAFF supported by the Hong Kong Economic and Trade Office in New York.

NYAFF is an annual flagship event of the New York Asian Film Foundation Inc., a nonprofit organization dedicated to the exhibition and appreciation of Asian film culture. The 18th NYAFF runs from June 28 to July 14, presenting over 30 films from various countries and regions of Asia.