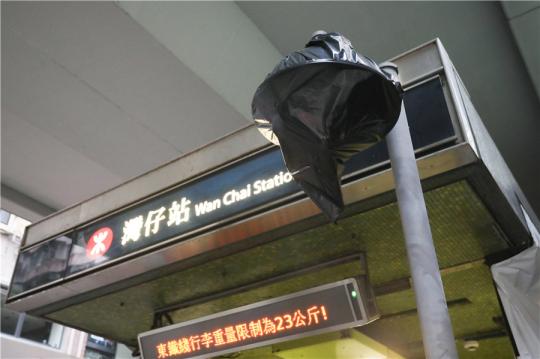 A piece of equipment outside an exit of Hong Kong's Wan Chai MTR Station on Monday morning is concealed with a black covering and needs to be repaired, after being damaged by riotous mobs on Sunday. （Photo/chinadaily.com.cn）

MTR Corporation Chairman Rex Auyeung Pak-kuen appealed to the public of Hong Kong to cherish the homegrown rail brand, which has braced up to throw its support behind the police in fighting against violence and vandalism that have roiled the railway system and the city.

Auyeung, 67, made the appeal in an interview with a local Chinese-language newspaper. He expressed hopes for the people of Hong Kong not to push the renowned local brand that was built up by the efforts of generations into the sea.

The city's rail network, which carries an average of 5 million daily passenger trips, has become a primary target of repeated vandalism by radicals in the ongoing civil unrest that has gripped the city for more than three months.

Following several deliberate disruptions of the railway services that paralyzed the metro services and affected hundreds of thousands of travelers, radicals set fires and smashed facilities at the major metro stations along the Island Line over the past two weekends.

In light of that, Auyeung said the company has recruited a large number of new security guards to shield the metro operations from vandals and ensure the safety of its front-line staff members.

This year marks the 40th anniversary of the start of MTR services in the city. It, however, saw its most severe challenge in its history, with more than half of the about 150 subway and light rail stations being sabotaged at a repair cost of up to HK$10 million. Not to mention, hundreds of thousands of passengers were affected by the overt challenge to the rule of law, a value the city holds dear.

Auyeung did not expect the radicals would defy a High Court's injunction order that bans deliberately obstructing the proper use of the metro services.

But he assured that the cost will not be transferred to passengers by a hike in ticket fares.

Several standoffs at the MTR stations turned into scuffles with MTR front-line staff amid the incessant weekend mayhem. This has saddened Auyueng, who said the railway has become sandwiched and battered by the political turmoil.

Auyeung said staff members for the MTR are not trained to deal with confrontations and the corporation is not experienced in dealing with massive public activities. For societal order, the police should step in, he said.

That's why the MTR will brace up and continue to support the police for strictly enforcing the law in the face of violence and vandalism, said the newly appointed chairman of the city's sole rail operator.

Auyeung assumed office in July 1, at a time when the city's political turmoil rocked the city for about a month.

He apologized for falling short of the public's expectations in handling the political unrest when the company arranged a free train to help anti-government radicals retreat after they confronted the police in the Yuen Long MTR station on Aug 21.

Auyeung said that the special train service arrangement was to evacuate the crowd as ground traffic was obstructed, adding that it was not out of political consideration.

In hindsight, it did give a bad impression to the public as it was like giving a ride to someone who refused to foot a bill after the meal and vandalized the property at the restaurant, he said.