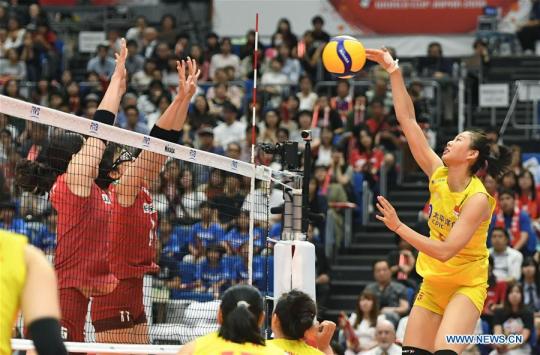 Gong Xiangyu (R) of China spikes the ball during the Round Robin match between China and Japan at the 2019 FIVB Women's World Cup in Yokohama, Japan, Sept 19, 2019. [Photo/Xinhua]

With five of its starting players scoring double-digits, China easily defeated host nation Japan 3-0 in a sold-out Yokohama arena here on Thursday at the FIVB Volleyball Women's World Cup to sit firmly on top as the round-robin tournament went halfway.

Japan had an aggressive start leading by 7-4. Captain Zhu and Zhang took turns to challenge Japan's tenacious defense while Yan Ni contributed solid blocks to help China turn the table to 18-12 and forced Japan into a timeout and soon a second as Gong Xiangyu's spike and block nailed two more points for China to lead 20-12. Sarina Koga won three points in a row for the Asian Championship winner after the timeout, yet was unable to close the gap as China claimed the first set 25-17.

The defending champions had a commanding 8-0 run to surge ahead 9-2 and headed into the second technical time out 16-7 with Gong, Yan, and Yuan putting up a "Great Wall" in front of the net to silence the Japanese attackers. The game later turned into a service show by Zhang, as her five aces spurred China's 7-0 run en route to comfortably taking a 25-10 win.

Japan regained form in the second set with Mayu Ishikawa, who was sent on late in the second set, carrying the team forward together with their top scorer Yuki Ishii. However, a more balanced China maintained the lead from 2-2. Japan saved two match points but Yuan's spike killed the game 25-17.

The two teams will have a two-day break before moving to Sapporo on Sunday when China plays Brazil while Japan hosts the United States.