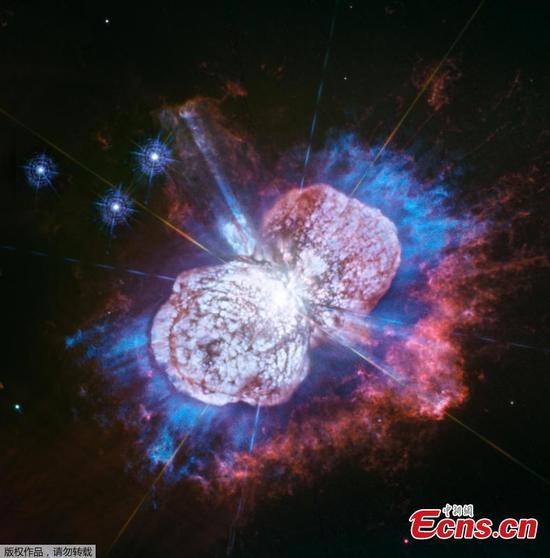 The Hubble Space Telescope has captured an ongoing fireworks show in the universe which started 170 years ago when a doomed super-massive star went through a titanic celestial outburst.

The U.S. space agency telescope showed that the hot, expanding gases of the star in a double-star system 7,500 light-years away glowing in red, white and blue, taking the shape of a bipolar ballooning lobes of dust, gas and filaments, according to NASA's press release on Monday.

The star called Eta Carinae may have initially weighed more than 150 suns and after its eruption, it was so bright that for a time became a navigational star for mariners in the southern seas, and now still visible to the unaided eye.

Astronomers used Wide Field Camera 3 on Hubble to map the ultraviolet-light glow of magnesium embedded in warm gas, and they discovered a gas never seen before.

"Most of the emission is located where we expected to find an empty cavity. This extra material is fast, and it 'ups the ante' in terms of the total energy for an already powerful stellar blast," said Nathan Smith at the University of Arizona in a statement.

The newly revealed gas is important for understanding how the eruption began, because it represents the fast and energetic ejection of material that may have been expelled by the star shortly before the expulsion of the bipolar lobes, according to NASA.

This technique of searching in ultraviolet light for warm gas could be used to study other stars and gaseous nebula, according to the researchers.