Villager makes prosthetics accessible to all 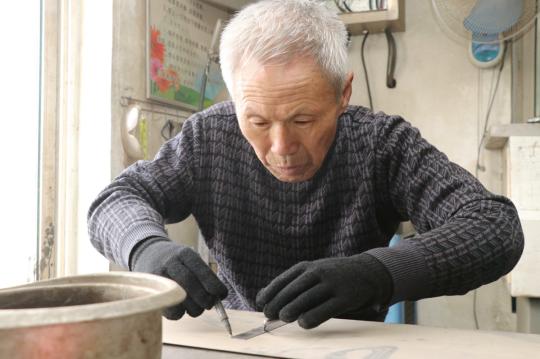 Sun Jifa draws an outline for a steel prosthetic arm at his workshop in Yongji county, Jilin province. [Photo/CHINA DAILY]

When Sun Jifa realized he could not afford to buy artificial arms, he decided to make them himself

Since Sun Jifa's online store opened on e-commerce platform Taobao in March, he has become much busier.

Over the past decade, Sun has provided his handmade iron forearms to more than 1,000 people, helping them to use mobile phones, play chess, saw timber and even drive tractors with the prosthetic arms.

Sun lost his forearms in an explosion when he was developing a fishing device in 1980.

"I showed great interest in inventions when I was younger, but the accident almost shattered my entire world," he said. "My wife and mother had to help me put on my clothes, brush my teeth and even go to the bathroom with me after the accident. I even thought about suicide because I could do nothing without my hands."

However, encouragement from his family members and his child's impending birth gave him hope to live on.

Hence, he needed a pair of prosthetic arms to help him with his daily life, but he found that he could not afford to buy them.

Therefore, he decided to make them himself. It took him several months to design, produce and adjust them repeatedly.

Sun guided his brother to nail a spoon to a piece of rubber and wrap it around his right arm.

"In fact, it couldn't be called a prosthetic arm. It was only a simple device that enabled me to eat," Sun said.

"It looked really ugly. Also, as a farmer and the head of the family, I needed a more functional device that could help me do more complicated manual labor."